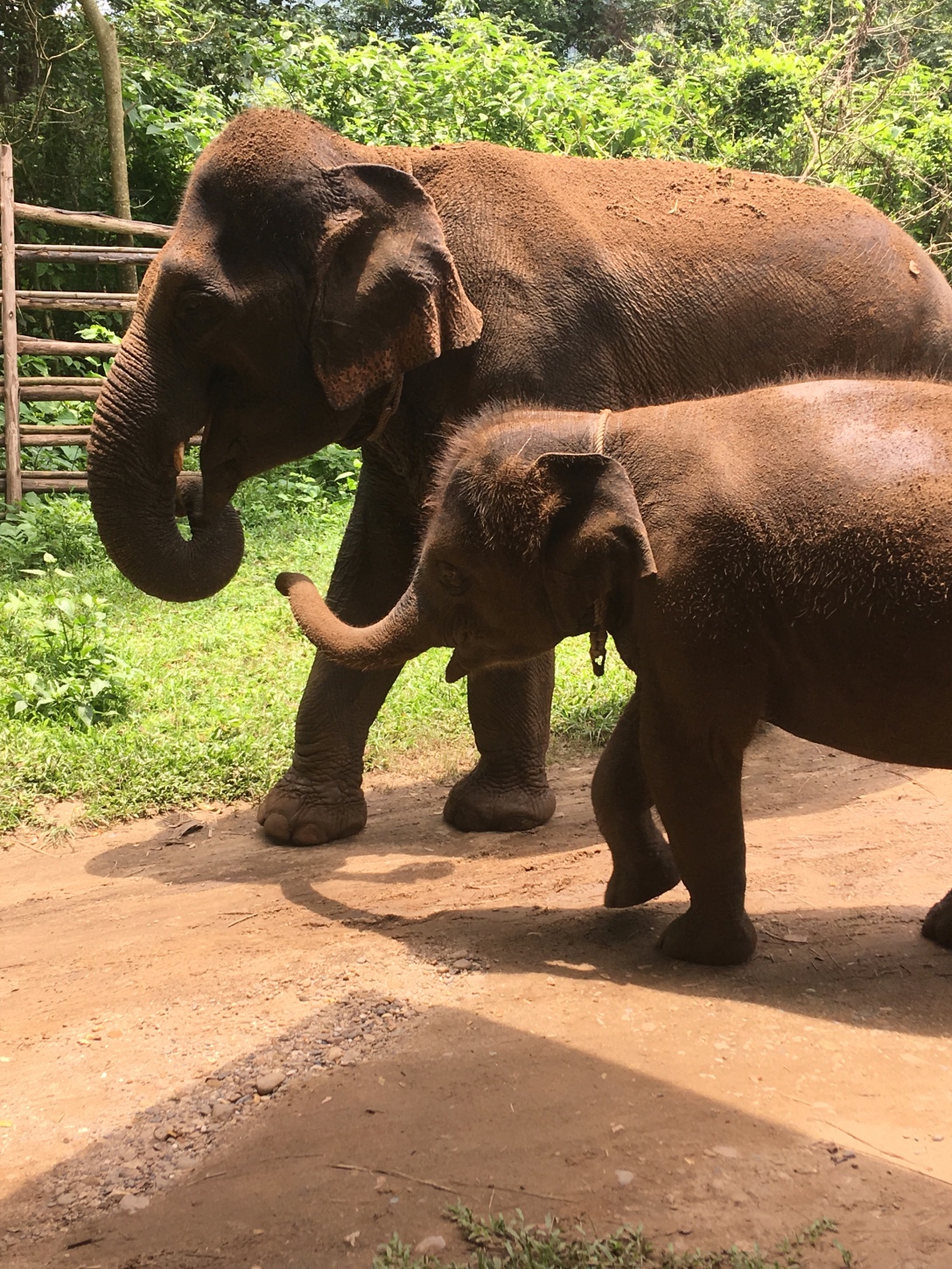 After my group had finished our volunteering in the Hill Tribe village – which you can read all about here-, we headed back to the city of Chiang Mai, where we had a couple of free days to rest and explore.

I ended up stumbling across a cat cafe called Cat Brothers on my way to famous, sprawling Sunday Market. If you’re ever in Chiang Mai, the Sunday Market is a must – it has everything from gorgeous souvenirs, to performers and delicious street food! 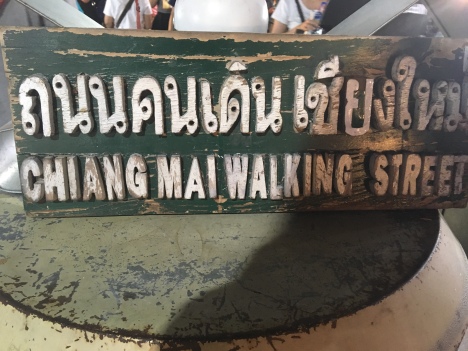 For the second half of our volunteering time, my group headed to Chiang Thai Heritage Park to care for rescued elephants. Elephants in Thailand have a long history of being abused, either in circuses or through heavy labour like logging. There are many elephant sanctuaries in Thailand, however some of these places which claim to help elephants still encourage tourists to ride them, and force them to perform tricks to entertain visitors. 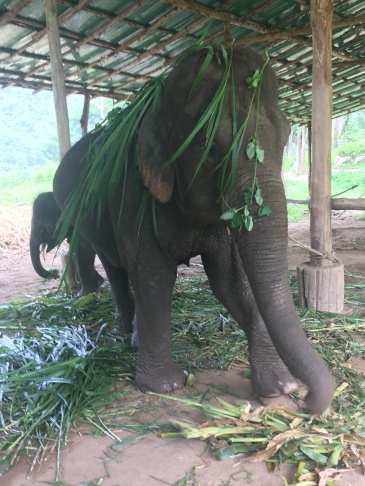 I was thrilled to be heading to the Heritage Park, and my first glimpse of elephants in person was breath-taking. I couldn’t wait to learn about how the park was caring for these animals, who had either been abused or had been rescued and now had no idea how to survive on their own in the wild.

At first the park seemed magical! There were two adult female elephants and a young elephant who had been separated from his mother so the park had bought him to provide him with a better life. We were informed that there were also two male elephants, but as it was mating season they were being kept separate a little way from the main pavilion.

On our first day we chopped sugar cane and fed it to the elephants by hand. Then, we took a walk with one of the female elephants and the baby elephant into some woods, where we learned more about the anatomy of elephants and got to see the baby playing in the mud.

Later on we got to take the same two elephants down to the river to help them bathe, as the workers at the park explained to us that when not in herds in the wild elephants can struggle to wash properly to maintain their protective, tough skin. 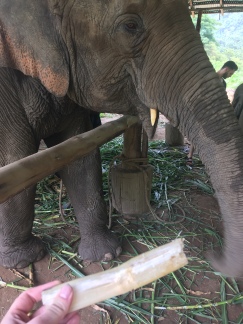 Part of the park experience meant we got cooking classes, so we said goodbye to the elephants and went to cook our dinner. When we took a walk after dinner we saw that the three elephants currently in the main pavilion were tied to posts that meant they could lie down, but couldn’t really interact with each other.  We were reassured that the elephants are only ever tied up temporarily to keep them safe while the workers are away from the pavilion or when visitors were coming and going from the park.

However, it became clear over the next few days that this was not the case. While the park brochure states that elephants are not restrained, when we questioned the owner of the park we discovered that he meant they were not tied up using cruel iron leg casts, which can give elephants sores. 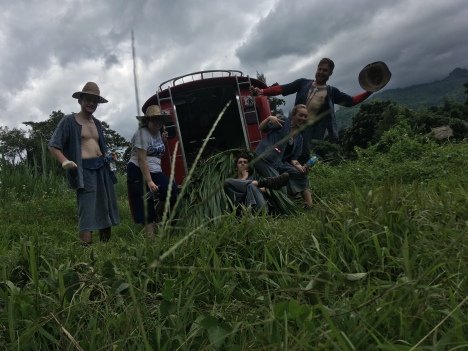 Any time we walked past the elephant pavilion the elephants were tied up aside from brief times where day visitors took them to the woods and the river, like we had on our first day. The baby elephant seemed particularly distressed as it didn’t seem to have much stimulation aside from bath time and feeding time.

We tried to continue our work in the elephant park over the next few days, but I personally felt that we were doing things that mainly benefited the park itself rather than the elephants, who we were there for. We filled in potholes on the road in and out of the park for large parts of our time there.

In the evenings we were invited over to the park workers’ huts to drink and watch TV. but I was always conscious that a few metres away the elephants were tied up, bored. When we eventually saw the two male elephants on a walk in the forest, they were tied up in an even smaller area and seemed to be restless. I desperately hoped that it was a temporary situation for mating season, but we had no way to be sure.

After a long discussion as a group and some googling to confirm that what we were being told about the elephants – such as that their constant swaying (particularly the baby’s), was a result of happiness rather than a way to self-stimulate because they were so bored – was false, we confronted the owner of the park and eventually decided to leave the park a few days early, with the charity’s blessing.

While it was amazing to see such beautiful creatures up close and personal, I couldn’t justify myself staying in a place where they weren’t free to roam around, and didn’t have toys or other activities to relieve their boredom. We have an amazing view across the river from the huts we were staying in, and could see elephants in other parks who were untied, and allowed to roam freely inside large areas of the other parks. 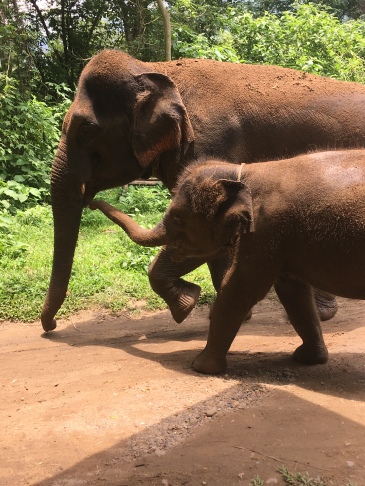 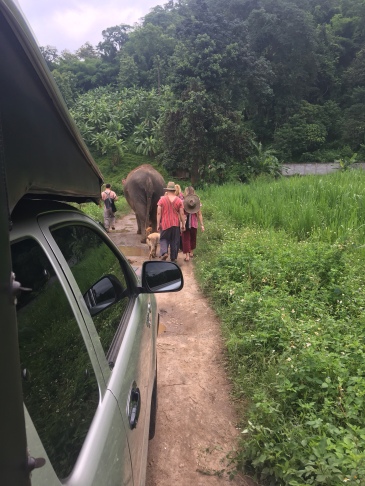 When we were leaving, the owner of the park promised us that he was saving up to build the large concrete pillars that an elephant-proof fence would need, while I took him at his word to mean. However, when we got back to the hostel in Chiang Mai, I discovered that he had replied to several negative online reviews about the captivity of the elephants saying that he was saving to build such a fence as early as three years before our visit!

In credit to the charity, during our debrief they took our concerns very seriously, and informed the park that unless the elephants were treated better they would no longer be sending smaller groups of volunteers to the park, meaning the park would lose some vital funding.

As we know had some extra time in Chiang Mai before we left Thailand, we looked for things to do. I booked a tattoo for myself (my very first one), and we arranged with the other two groups to visit a water park all together on our last day. We also got to see a Muay Thai tournament which was amazing! 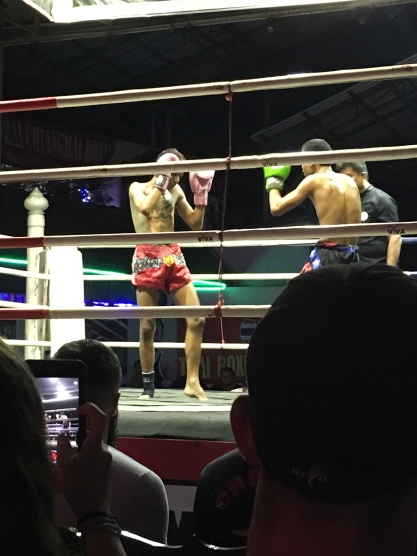 While it was really disappointing to have left the Heritage Park early, especially as an animal lover who had been looking forward to seeing elephants up close and personal since before we started fundraising, I know it was the right call as it should help force the park to provide better care to the animals.

It was incredible getting to visit Thailand, especially with such an amazing group of people! 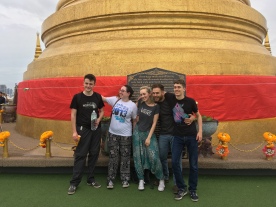 Until next time, Dani x

3 thoughts on “Volunteering in Thailand – Part 2”

This site uses Akismet to reduce spam. Learn how your comment data is processed.